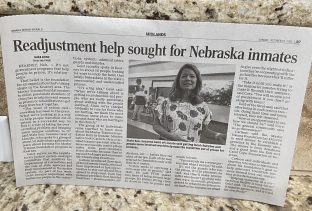 That belief is the foundation for an organization that’s taking shape in the Kearney area. The Master Trauma Foundation aims to enlist passionate members of churches to help men and women in prison or rehabilitation to get their lives back together.

“The issue of prison overcrowding has been in the press. What we’re looking at is a way to help people transition out of prison in a successful way. So this is a way of taking the overcrowding problem and bringing some unique solutions to it,” said Suzanne Geist, a state senator from Lincoln who spoke to a group of about 50 individuals gathered to learn about forming the Master Trauma Foundation program in Kearney.

Geist serves on the Legislature’s justice system oversight committee that monitors the Department of Corrections and the role of state agencies and their involvement in the justice system. As part of her work, Geist became acquainted with numerous people in the corrections system: administrators, guards and inmates.

Geist recently spoke in Kearney to about 50 people looking for ways to undo the harm that befalls Nebraskans in the state’s overcrowded and understaffed prisons.

“It’s a big idea,” Geist said. “What we’re talking about is getting local churches and people who are really passionate about walking with the people involved. Since we’re charged biblically to care for those who are hurting, we think the most common sense place to come around those who are hurting is in the church.”

The group of 50 individuals came together to learn more about the Master Trauma Foundation from its founder, Minden native Scott Carlson. He is a certified trauma specialist who believes most people sent to prison suffer from post-traumatic stress disorder because they’re exposed to danger and encounter life-threatening situations.

Carlson introduced three men, all from Dawson County, who had been imprisoned or had opportunities to stay out of jail if they agreed to drug court. Each had personal problems that haunted their lives — abusive parents, addictions, etc. — before they ran afoul of the law. Each of the men referred to themselves only with their first names.

Support Local Journalism
Your subscription makes our reporting possible.
“Crisis mode is surviving a 900-man riot in prison,” said Matt. He said PTSD makes him leery of being around large groups. He prefers sitting close to doors in case he panics and needs to leave.

“Prison made me a worse person than when I went it,” he said.

It’s not the guards who run the prison, it’s the prisoners, he said, and they’ll make anyone suffer who doesn’t go along with their ways. As a result, programs geared to rehabilitate prisoners are ineffective because inmates are afraid to give even the slightest indication they’re cooperating with the authorities because they’ll suffer for it.

“Fake it until you make it,” is the mantra for inmates trying to make it through their sentence, said Cory. “You will receive a lot of punishment if you don’t go along with them.”

Each of the three men said that after being in such serious trouble, doing their time and being released, they felt shunned.

“Give us an opportunity to see how we should be,” said Cory. “The general community sees us as throwaways.”

Carlson said the Master Trauma Foundation has $50,000 in seed money to establish a presence in the Kearney area. The money is from donations and a grant from the Ron and Carol Cope Foundation of Kearney.

Carlson said Nebraska is attempting to solve its prison problems by building a $230 million prison and offering $15,000 hiring bonuses to attract new guards, but prisons are such a toxic places that many guards leave before they’re eligible for the bonuses.

Carlson said individuals and churches who want to learn more about his foundation’s goal to help prisoners transition into more normal lives can contact him at mastertrauma.org.

“Helping someone in a correctional facility is long-term,” Geist said. “It requires passion, it requires patience, and it’s not for everybody.”

Your donations are always appreciated. Learn more about how we use your contributions by visiting the How to Help page.